The Lifestyle of a Flight Crew Staff Member 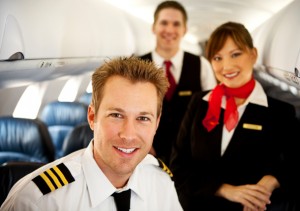 When we board an airplane, many of us take for granted the kind of week that the flight crew on board have had. We consider traveling hard on ourselves as passengers, but the pilot, co-pilot and flight attendants operating the plane have more than likely faced many more challenges than ourselves prior to the flight. It is not uncommon for a flight crew staff member to regularly work overtime, pulling shifts as long as fourteen hours, sleep for less than eight hours in a hotel room, then get up to do it all over again the following day. Flight crew staff members have some of the most unpredictable schedules of any working professional, due to flight changes, delays and re-routes. The life of a flight crew staff member can be rewarding, but it can also be heavily demanding.

The airline industry has a massive work force, and there are many people who seek a career in aviation or in flight crew membership. The reasons for this are obvious. Working for an airline comes with many benefits, such as pensions, retirement plans and full medical coverage. The salary is decent and consistent. In addition, the lifestyle of a flight crew staff member greatly appeals to certain types of people who seek travel, adventure and a frequent change of locations. There is no denying that this type of position is perfect for certain personality types.

However, the rootlessness and long hours can also be very wearing on an employee. A position as a flight crew staff member calls for the employee to be constantly on their toes. Their work schedules, hours and destinations may change at a moment’s notice. They are frequently separated from their homes for a long duration of time, living out of hotel rooms. They may not even get a full night’s sleep between work shifts. This type of lifestyle leads many flight crew staff members to stress, anxiety, depression or a number of other hardships. Some are able to cope with these hardships, while others have breakdowns or develop a substance abuse disorder to cope. The most important thing a flight crew staff member can do for themselves is take care of their own health and assert their own demands if they are unable to properly care for themselves. If they are struggling with a serious mental condition, such as addiction, substance abuse or a mental disorder, they need to receive counseling and treatment at a top quality rehab.